Add a Green Screen Effect to Screencast Videos with Camtasia 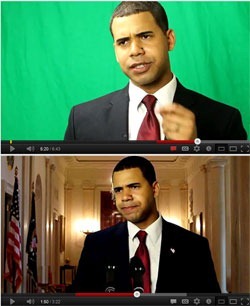 Chroma key is a popular technique used in news rooms and films where the video editing software replaces the background of a video with a different scene which could either be a still image, an animation or even a video.

For instance, the news reader could be sitting in her television studio, in front of a green screen, but with Chroma keying, she can be virtually transported to any other location (like the White House).

Most video editing software including Adobe Premiere Pro, After Effects and Apple iMovie can help you add green-screen effects to your videos and so does the latest version of Camtasia for Mac.

Camtasia Studio, as most would know, is a screencasting software for Mac and the new version 2.1 makes it relatively easy for screencast producers and presenters to add Chroma keying to their videos without additional software.

The update wasn’t available at the time of writing but there’s a new YouTube video that demonstrates how one can replace the green background in screencast videos using Camtasia for Mac.

Navigate to the Video Effects tab and drop the Remove a Color effect to the video timeline. Select any color in the video to remove it. It helps if the background screen is green as the person standing in front of the screen is less likely to wear that color and thus the software can easily replace the green shades.

Camtasia for Mac is $99 per license though this upgrade will be free for existing Camtasia users according to the description of the YouTube video.

While you can easily construct a green screen background using either a piece of green cloth, sheets of paper, or you can paint the wall green but the more important thing is that your background should be evenly lit and that there should be no shadows on the screen as the chroma keying software may not detect them as green. There should be no wrinkles on the sheet either as they will difficult to remove in the final video as well.