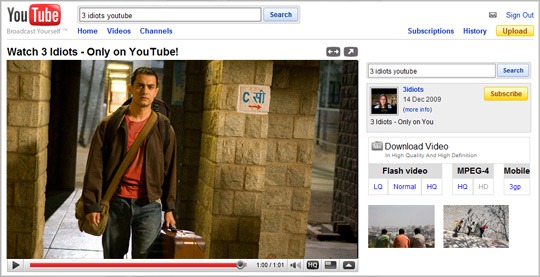 You could always download videos from YouTube using “hacks” but this is probably the first time where people will be able to “legally” download a full-length movie from YouTube after paying Google a certain fee.

The film producers won’t say how much a viewer would have to shell out in order to download the movie from YouTube, the size of downloads (this can be a major deterrent in India considering our average connection speeds ) and whether there would be any other restrictions attached.

In any case, if this “pay-per-download” experiment proves successful, we can surely expect more such “online releases” in the future because it will become much easier for producers to tap a global audience. The Hindu and ET have more details on this story.

The 3 Idiots movie is already running in theatres across India with some innovative marketing but its YouTube debut will happen only after 12 weeks so as not to affect the ongoing ticket sales. Here’s an HD Trailer of the same movie on, you guessed it right, YouTube!