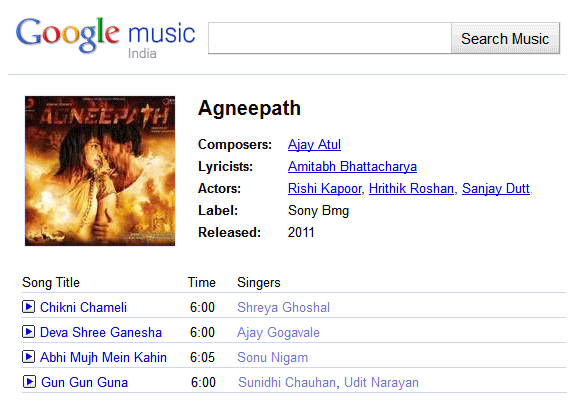 In October 2010, Google launched a music portal in India to help people find “legal” songs from Bollywood films and music albums. Google partnered with three music companies – Saavn, Saregama and In.com – for the content and itself played the role of an aggregator.

The music service is still available at google.co.in/music but it looks like Google has more or less abandoned the project.

The homepage of the Google India Music website hasn’t been updated for a long time now and a quick search reveals that none of the newer Hindi films – like Kahaaani or Agent Vinod – are available in Google Music though they are very much part of the online catalog of Saavn and In.com.

Another time-sorted Google search suggests that just one music album has been added to Google’s Music catalog this year.

Google has a revenue sharing arrangement with partners - the music player window shows regular AdSense ads  - and the initial plan was to integrate music into their main search results. That never happened or maybe the advertising revenue wasn’t convincing enough for partners.

Fortunately, you can do easily without Google Music as there’s Dhingana, Gaana, Saavn and Flipkart’s MP3 store.