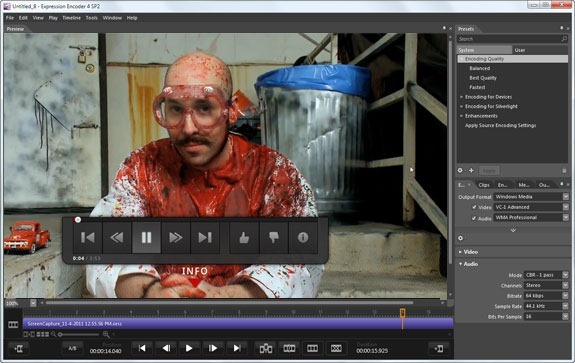 Camtasia Studio for Windows is probably the best software for recording movies of your computer screen but if your budget doesn’t allow for a $299 screencasting tool, the next good alternative is Expression Encoder.

With Expression Encoder 4, you can record a movie of your desktop screen of any size and simultaneously capture the webcam video and audio narration from a microphone. Alternatively, you may capture the screen activity without the audio and add a voiceover later at the time of producing the video using the “Audio Overlay” feature.

Expression Encoder has been around for a while but with one limitation – the free version would only let you screen capture 10-minute video clips and if you were to record clip of longer duration, you had to switch to Expression Encoder Pro.

Well the good news is that Microsoft has recently released a new version – Expression Encoder SP2 – that contains bug fixes and stability enhancements and they’ve also dropped the time limitation. That means you may now use the free version of Expression Encoder to create longer videos of your computer screen and publish them in high-quality formats.

Expression Encoder includes several features that you would miss in most other free alternatives. For instance, there’s an option to hide the cursor from the recorded video, you can change frame rates for more smooth recordings, logos can be added to the video and, best of all, there’s a built-in editor to help you produce a more polished video.