Which Sites and Blogs are Indexed by Google News?

The English language edition of Google News tracks stories from over 4,500 sites – which includes both news websites and blogs - but that is all we know. Google has never published a full list of their news sources and the only way to determine if a website is indexed in Google News or not is through the source operator. 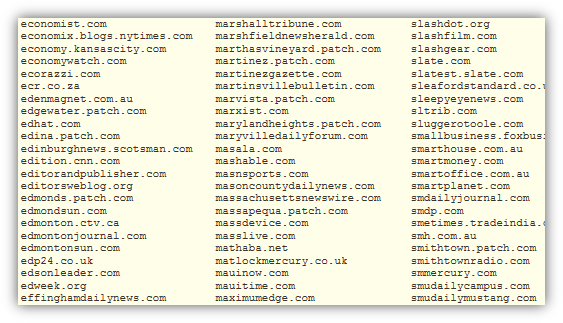 The names of Google News sources are however no longer a secret now.

Krishna Bharat, who is the brain behind Google News, recently released a massive list of 150,000+ news articles around Osama Bin Laden that were published on news web sites around the world after the Abbottabad operation was over.

Since almost every publisher had covered the bin Laden story around that time, it is extremely likely that Bharat’s list contains the URLs of more or less every news source that is crawled by Google News.

You may download this data as a text file for offline parsing while a copy is available on Google Docs as well for online sharing. If you are curious, this human readable list of sources was prepared using the following Linux command.