The Economics of Sholay Movie

Released on 15th August 1975, Sholay, a cult movie, changed the course of the Indian film industry. At Mumbai’s Minerva theater, it was shown for 5 years continuously, a record still unmatched. Sholay still remains a dream, a standard, a reference point for Indian cinema, be it the audience or the industry. People do not ask whether they have seen Sholay or not, but how many times?

Sholay was made at a budget of Rs. 2 crores in 1975, it was a lavish production for its time and went around Rs.3 lakh over-budget. Initially, it was about to be removed from cinemas due to low attendance figures, but it picked slowly through word of mouth (perhaps the only reliable media apart from print and radio, as there were no television and internet for critical analysis and trailers), making it the biggest hit of Indian cinema celebrating record golden jubilee (50 weeks) at 60 theatres across India.

Then, it was sold at a price of Rs. 22.50 lakhs per distributor and recovered a staggering Rs. 6 crores per territory. The figure may sound miniscule in today’s times as films do business of Rs 15-20 crores per major territory, but in those times, even 1 crore was the magical figure. In the rerun in 80s, the distributor price was doubled. Its tickets were priceless, being blacked at outrageous prices. At some theaters, the queue to ticket counters stretched more than a kilometer. 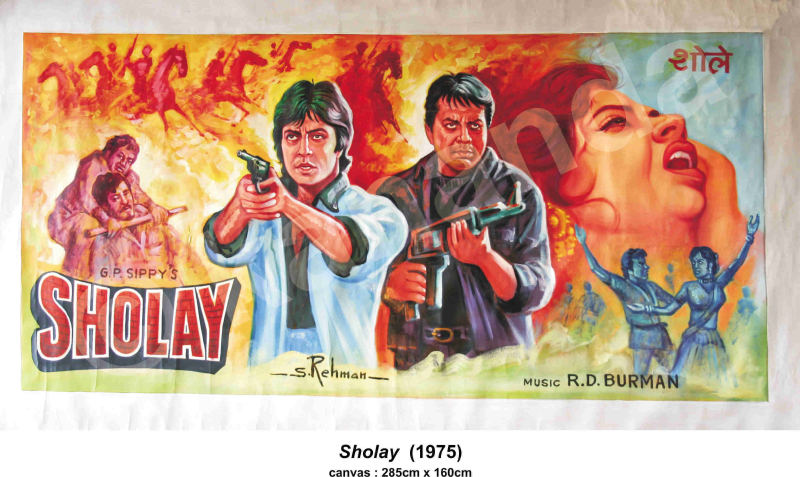 Sholay has been the highest inflation adjusted grosser of all time. In the first run, it grossed Rs 35 crores in its first run, plus few more crores in repeat runs. It’s all time net adjusted for inflation comes at a whopping Rs. 236.45 crores. Now compare any investment in the world which has delivered returns 120 times of cost in 30 years.

Sholay is out of the theaters, but thanks to television, VCRs, and DVDs, it is widely available and still extremely popular. In 1996, Sholay was first shown on  Doordarshan, and sources say streets were virtually empty during the show. There are many films made citing Sholay as the central theme but none have been successful, the latest ‘Ramu ke Sholay’ (expected to release on July 13, 2007) may however buck this trend, as the expectations are pretty high owing primarily to Amitabh Bachchan playing ‘Gabbar Singh’.

Considering the beneficiaries involved, obviously producer top the list, followed by distributors, exhibitors, music company, the characters of the film, the technicians, Indian government, satellite TV, DVD rights owner, ad companies, cartoon and comic creators,  Indian mothers (for  having a  villainous character which frighten children)  and above all the audience, who benefited by witnessing a classic piece of art.