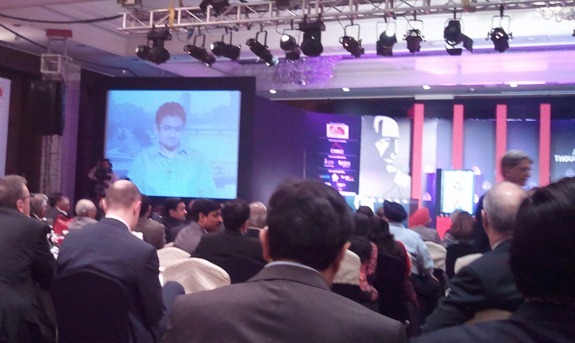 Wael Ghonim is a marketing executive at Google but to the outside world, he is now best known as the face of the famous Egypt revolution that ultimately led to the removal of Hosni Mubarak from power. Internet had played a major role in the Egyptian Revolution so it was no surprise that when Wael met Sir Tim Berners Lee, the inventor of the World Wide Web, his first words were – “Thank you for the Internet.”

This is just one of the many memorable scenes from India Today Conclave 2011 that recently concluded at the Hotel Taj Palace in New Delhi. The speakers included top politicians, entertainers, technologists and also Vijender Singh, the lone sportsman who got a standing ovation after his short but frank speech on our obsession with Cricket.

There was Shah Rukh Khan who lamented the fact that despite the burgeoning Indian software industry, we don’t have enough people skilled in visual effects required for film-making. He commented that the kind of ‘special effects’ related work that comes to India is the one that requires the least amount of skill - Let’s stop being proud of the fact that we removed wires in Harry Potter that made him fly.

Shah Rukh shared a quote from Alfred Hitchcock that sent everyone into a sea of laughter – the length of a film should be directly related to the endurance of the human bladder. And there was one thing common between Shah Rukh and Sonakshi Sinha – both read their speeches from an iPad 2.

The “digital debate” session with Sir Tim Berners Lee, Josh Klein and Wael Ghonim was particularly interesting for me. Wael compared how the Egyptian revolution was like Wikipedia where everyone contributed their own bit selflessly and that there was no real hero. In Wikipedia, everyone contributes and you rarely know who the actual contributors are.

Wael shared that the Egyptian movement was part inspired by the silent protests of Mahatma Gandhi in British India and how they used modern communication tools like Facebook to involve hundreds of thousands of Egyptians, including people who have never used the web. It was an inspiring story and though Wael was speaking from Cairo over a video link, the atmosphere on this side was electric.

In response to Sir Tim Berners Lee’s poll on who should have the power to control the Internet, the answer was a unanimous “nobody” which Tim suggested was both good and bad. He said he was more worried about large corporations controlling the Internet than the Government itself.

Unlike most other conferences where the audience are often engrossed with their mobile phones or laptops – either they are live-tweeting the event or just checking their emails – the India Today event was a different experience. The people were genuinely interested in what the speakers had to say and this was quite evident from the Q&As that happened after every panel. The cellphones often stayed in the pockets even during the session breaks as networking took precedence.

Overall, the event was a good learning experience and one left with a feeling of time well spent. Thanks India Today for inviting me!