While youngsters and tech enthusiasts often worry about the camera megapixels or what OS is powering a mobile phone, most adults I know (people above the age of 50) have a very different requirement.

They need a cell phone with large buttons so that they may easily dial numbers even without the reading glasses. The menu options should be simple and it really doesn’t matter to them if the phone is missing a camera, QWERTY keyboard, wireless internet or even apps. For them, less is more. 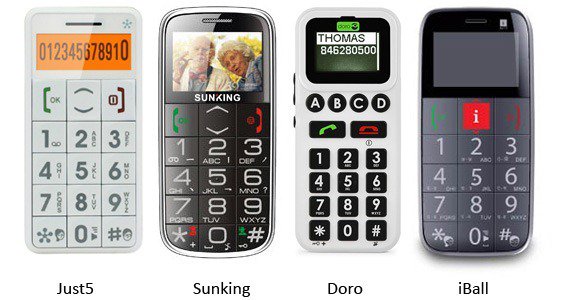 The Just5 range of mobile phones for senior people quite fit the bill here. These GSM based phones have minimal features but the easy-to-read buttons with large text, brighter screen, and longer battery life make them appealing for seniors.

Swedish firm Doro has the HandlePlus series that is also targeted at seniors. There’s a large keypad, the numbers on the display appear in big fonts and that’s pretty much it.

In India, iBall recently introduced the Aasaan phone (Aasaam means easy to use) for both English and Hindi languages. The phone has just the basic features like SMS, FM radio, clock, etc. and there’s an SOS button that, when pressed, will automatically message your contacts.

Chinese manufacturer Sunking Mobiles have a similar model in their catalogue and there’s a possibility that they may be handling the production for iBall as well.

Here’s a TVC for the iBall Senior phone that is currently being aired in India.