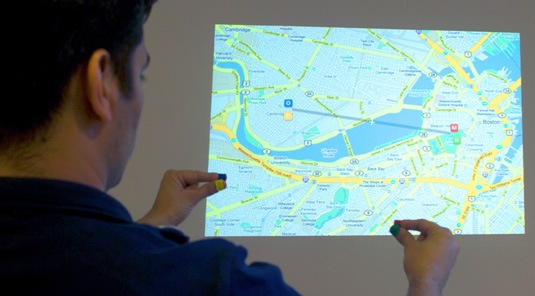 Science fiction meets reality. Pranav Mistry from the MIT Media Lab has developed a wearable internet-connected computer that can turn virtually any physical surface (like the wall, your hand or even a book in your hand) into a Microsoft Surface like table computer allowing you to interact with that surface using simple freehand gestures.

Called Sixth Sense, a prototype of the device was recently demoed at the TED Conference by Pattie Maes (Pranav’s advisor) and it left the audience completely awestruck.

For instance, you could pick up any book from the store and the device will display ratings from Amazon.com on the book itself. Or you could project Google Maps on the wall and zoom & pan using fingers.

The video also show how you can display a pile of photographs on the wall of your room and arrange them using natural hand gesture similar to Microsoft Surface. Or do graffiti on the wall by moving your fingers in the air without touching real paint. 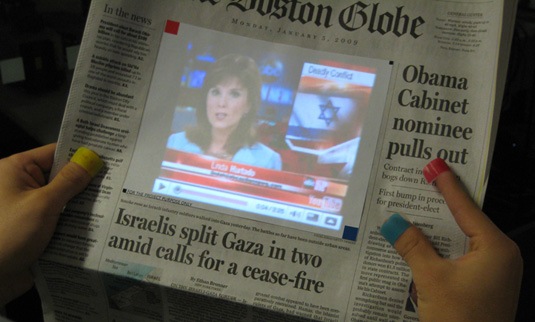 In this picture, a newspaper shows live video news projected from the video camera of the “Sixth Sense” computer. Pranav says in an interview that any application, now on your computer or mobile phone, can be used inside Sixth Sense.

The device costs less than $350 to build but the price will obviously models “if” it goes commercial and reaches the “mass production” stage.